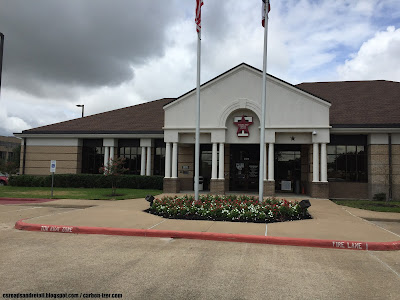 There used to be a sign outside used to feature an electronic display featuring the time and temperature, but today no longer has the electronic component.

Not too much to say about Aggieland Credit Union here at 201 Southwest Pkwy. East beyond opening in 1997. They used to (maybe they still do, but I haven't been inside for a while now for obvious reasons) have pictures of almost every Aggie Bonfire going back years, though there was never a Bonfire after 1998 due to the 1999 collapse. Pictures in this post by author, 6/20.

Editor's Note: I'm going to try to take a brief break after this to get my thoughts back in order, mostly because I don't want to keep posting filler. While I do have some new posts planned, I'm going to focus on closed-down or otherwise defunct businesses, with more love and attention given to Bryan.