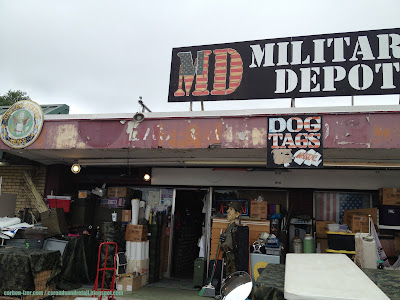 You can barely make out the EAS (from Eastgate) here, but I think the shadow next to it was from Military Depot, not its predecessor tenants (May 2014).

Military Depot was on the short list in 2017 ("Season 3") and probably would have come after "At Home" on the Boriskie Ranch but as that post describes, things happened and it got shelved (it got close enough to have a post mostly written up). This post is intended to replace the the big Eastgate post.

105 Walton started out as a UtoteM, with a 1961 aerial appearing to show it under construction and a 1967 article mentioning it was going to 24 hour service (which must have been rare at the time, even 7-Eleven had only experimented with 24 hour stores in Dallas-Fort Worth and Las Vegas) and continuing to do so until the chain was bought and rebranded as Circle K in 1984. By the late 1980s, the convenience store changed hands to become Eastgate Food Store (Circle K's absorption of the outdated UtoteM stores ultimately proved to be a mistake, and by 1990 it would file for bankruptcy, with major market exits coming soon after). Some time around the early 1990s ('92-'93), Eastgate Food Store closed up shop entirely and Military Depot (which had previously been at Post Oak Mall) moved in soon after.

The 1992 date sounds right for the last time Eastgate Food Store saw the light of day, you can see it listed as part of this 1992 streetscape study: 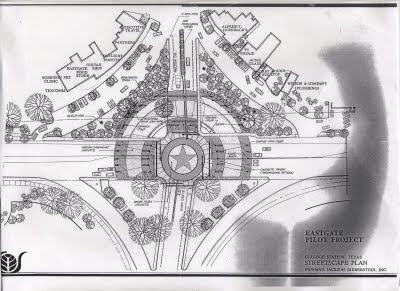 There's also a green roofed building next to it that held a few tenants years ago, including Robinson Pet Clinic in 1989, but it's been vacant for a number of years now. The picture was taken in May 2014 with no activity since.

Editor's Note: So Blogger is pushing out a new update that is due to go "full" in less than three weeks (as in, the old one no longer operational). It's slow, cumbersome to go through post archives, makes adding labels to posts much harder, et cetera.

The end result is that unless things change (unlikely), I'm going to move forward on an idea that until recently was a fairly drastic option...to functionally shut down csroadsandretail.blogspot.com and move it to Carbon-izer in the style of my existing Waco page, except with a nicer layout, and some newly updated pages (an idea of updating almost every existing page was in the works). It means that while the blog format will be going away, the content won't...the Facebook page will continue to update, the Maps page will continue to update, and even the "comments" page might continue--though again, comments were a failure for the most part, and having a robust comments area like Columbia Closings or some of the retail blogs I still frequented when I created this site, would never happen.

Sadly, this also means that some other of the blog's features, like being able to locate all the buildings under a similar category, like all the [hotels and motels], will be gone. The new posts will be arranged by neighborhood and will be undated (besides, all the old posts, like 2013 and prior, are so extensively modified that they hardly resemble their original incarnations).

In the meantime, new pages will continue to appear on this site.