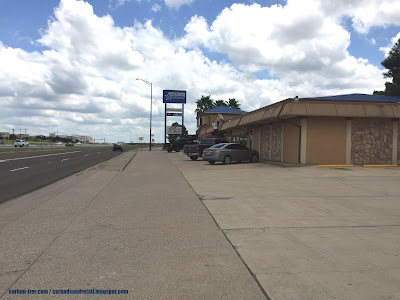 The motel hugs the freeway tightly. (Picture by author, 7/20)
Ponderosa Motor Inn first opened in 1971 at the intersection of Ponderosa Road and State Highway 6 (3702 Highway 6 South), citing the highway's presence and the continued growth of the city in that direction, both of which were true. While the motel had a restaurant, private club, and meeting rooms, all of which were standard in motels modeled after the standards that the growing Holiday Inn chain pioneered in the 1950s and 1960s, it was very isolated from just about anything, about two miles from the nearest commercial establishments on Texas Avenue (near modern-day Holleman), and a few years before even the Southwood Valley area began to take off, which would see new development, such as Kmart and Doux Chene Apartments within a few years. 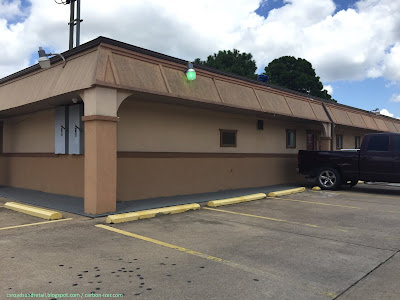 As a testament to the old age of the property, some mercury-vapor lights still hang. It wasn't nearly as green as my camera it thought it was.
Ponderosa Motor Inn soon built an addition to the main two-story building and another building out back with additional rooms facing east and west, and for the next three decades it would be the furthest south motel/hotel in the city until Navasota. It wasn't until 2001, when Courtyard by Marriott built a hotel at Woodcreek Road and the Highway 6 frontage road, ending the motel's dominance as the furthest south hotel, and unlike the motel, was a true hotel with interior corridors. By that time, the area that Ponderosa had once been alone in was starting to get rather built-up, and it wasn't slowing down.

The hotel changed hands a few times (though it remained as Ponderosa Motor Inn until around the early 1990s), and after a brief time as "Varsity Inn", the motel became Howard Johnson Express. At some point, the hotel restaurant became an independently owned Mexican restaurant, Mi Familia Coco Loco. 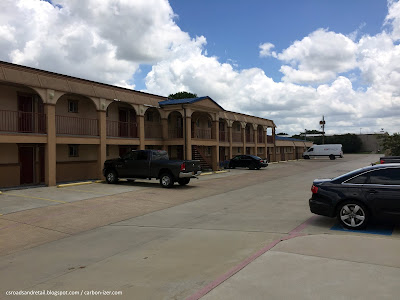 When the motel became Americas Best Value Inn, the hotel used its new logo on the outside, but still had the older style of room numbers.
In 2016, the "second building" was torn down, and, after about two years or so of construction, a four-story Microtel Inn (or rather, "Microtel by Wyndham") was built in its place. The final product was outlined in blue neon, giving it a unique appearance but also unfortunately similar to the sleazier hotels along Houston freeways. Sometime around the time Microtel was completed, the original motel was rebranded as Americas Best Value Inn (a different owner than what Microtel and Howard Johnson's belonged to). Perhaps the Microtel will get an article of its own someday. 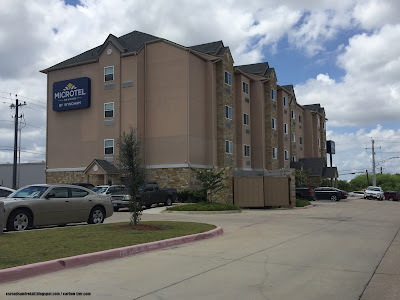 View of Microtel from the parking lot
It should be noted that today, Ponderosa's location is not that well located off of the freeway. Prior to the mid-2000s, you could access Ponderosa through the two-way frontage road it was on by exiting Rock Prairie from either end, and today is probably best worked through the back but in the early days (before the freeway lanes were extended down by 1991), Ponderosa turned into the northbound frontage road (two way) and turning left directly into Ponderosa was an option! 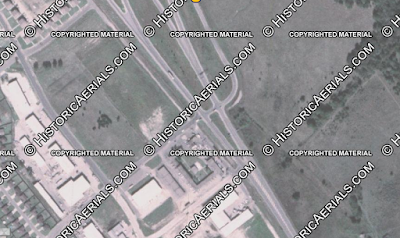 Note the southbound frontage roads were not complete at this point.