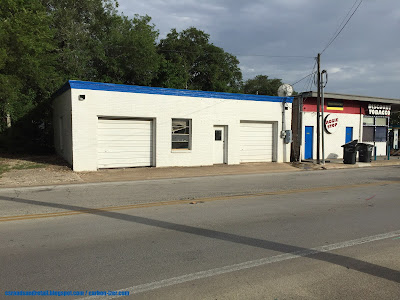 There hasn't been much activity here in years.
The third and final "new" tag, [Series: Curator's Choices] focuses on the "short list" of previously planned posts. Mechanics Unlimited was the last known business at 102 Lincoln, which was briefly covered on what was originally called "Mobil & Mechanics", a post published back in 2014. As of this writing, this post has been removed from the Index to be rewritten and updated.

102 Lincoln was likely built in the 1940s (according to what I can find, the city estimates it was built in the 1940s, and it was definitely in the 1960 aerial) and sits on a tiny lot. Known as "Murphy's Garage" in old listings, the building hasn't changed much in at least six years. When I photographed the building in 2014, you could see the the maroon-painted plywood that boarded up the garage doors, as well as some of the maroon paint that was once on the bricks. If I recall, these had been painted maroon after Mechanics Unlimited (which was painted on the outside of the facade) closed (which I recall closing in the early 2000s, though can find little proof of it except in this 1990s-era listing). 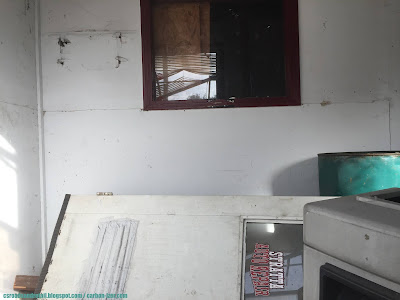 Looking inside, there's remnants from Stratta Auto Repair next door.

The pictures seen that aren't linked are the ones taken in June 2020.

Editor's Note: Afraid this may be the last post from the breakneck schedule over the last month, trying to prevent burnout. I'll be working on a few older posts in the meantime.
Posted by Pseudo3D at 3:00 AM