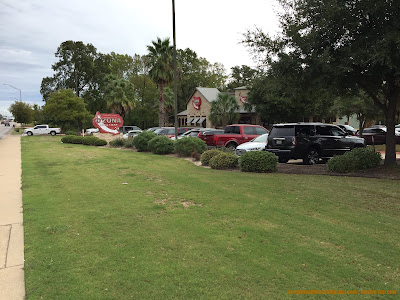 October 2019 picture by author.
The current occupant of 520 Harvey Road is Ozona Grill & Bar, a branch location of a single Dallas-area location, that based on reviews, appears to be nothing to write home about. It opened in early 2003 (February/March) according to what I could dig up online on the Eagle archives (it doesn't seem to want to cooperate with archiving links), but what's a bit more interesting is what it originally started out, Kona Ranch Steakhouse, built around 1999/2000, much like the Sonic next door. Not to be confused with Kona Grill, which is alive and well as of this writing.

Kona Ranch has somewhat of a murky history, originating out of Brinker International, spun off as Kona Restaurant Group, then getting bought as part of Fired Up, Inc., which also purchased Johnny Carino's off of Brinker.

The best description I could find of Kona Ranch was it was somewhat of a theme restaurant (like many chains), "[emphasizing] a Hawaiian cattle ranch theme with grilled and smoked meats, and specialties such as coconut shrimp tempura". Digging up some more information mentions a San Antonio location, but I doubt that it expanded much beyond the Texas area (except for Oklahoma). I can't even find anything where they opened a Houston location (it's technically possible, but I could find nothing) and from what I could tell by 2006 the restaurant had totally disappeared so Fired Up could focus on Johnny Carino's, later named Carino's Italian Grill (but I think the name reverted back). 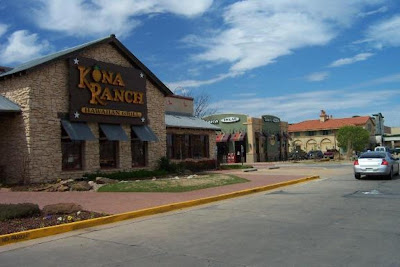 Johnny Carino's next to Ozona continues to operate as usual, but it might not be for long. The restaurant chain has been in a spot of trouble lately...similar to the situation of Fazoli's, it's down to 16 restaurants in Texas as of this writing.

It was also tough digging up a "normal" logo of the dead chain, with only this ad from the Houston Chronicle as part of a group taking the restaurants to Kuwait. Chili's and Carino's continue to operate, but Kona Ranch does not (if it ever did). 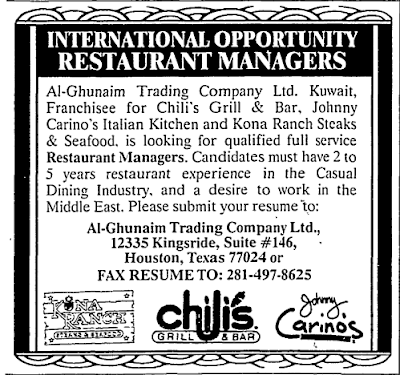 The Round Rock location has been through several restaurants, currently Salt Traders Coastal Cooking (since 2016), and previously Mesa Rosa (the previous decade).

The closure of the Round Rock and College Station locations represented an exit of the chain from Texas.
Posted by Pseudo3D at 11:33 AM